Drawn to Buddhism in his early 20s, after completing his university studies he traveled to Sri Lanka, where he received novice ordination in 1972 and full ordination in 1973, both under the late Ven. Ananda Maitreya, the leading Sri Lankan scholar-monk of recent times.

He was appointed editor of the Buddhist Publication Society (in Sri Lanka) in 1984 and its president in 1988. Ven. Bodhi has many important publications to his credit, either as author, translator, or editor, including the Buddha — A Translation of the Majjhima Nikaya (co-translated with Ven. Bhikkhu Nanamoli (1995), The Connected Discourses of the Buddha — a New Translation of the Samyutta Nikaya (2000), and In the Buddha’s Words (2005).

In May 2000 he gave the keynote address at the United Nations on its first official celebration of Vesak (the day of the Buddha’s birth, enlightenment, and passing away). He returned to the U.S. in 2002. He currently resides at Chuang Yen Monastery and teaches there and at Bodhi Monastery. He is currently the chairman of Yin Shun Foundation. 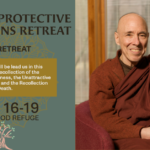 Bhikkhu Bodhi will be lead us in this retreat on the recollection of the Buddha, Loving Kindness, the Unattractive Nature of the Body and  the Recollection of Death.

Please join us LIVE on Facebook on Tuesdays &  Sundays at 12pm EDT.